To Be an Entrepreneur 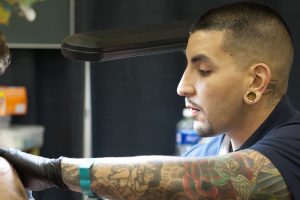 Many people have great ideas for the next big thing.  Having an idea and seeing it to fruition takes that certain someone. I sat down with Bale from Albuquerque’s Por Vida Tattoo to talk about his latest endeavor, creating a magazine entitled “Tattoo Marque”.

In this episode of Bastards of Art, Bale shines some light on how he approaches life as a young entrepreneur.  To his credit he has a built a successful tattoo studio, starting his 7th year promoting Duke City Tattoo Fiesta and has just finished his fourth issue of his new magazine.

There are a few character traits that one needs to accomplish such lofty goal. Bale tells us how he tackles his problems and pushes aside the obstacles that would have stopped other long before they started.

Seven Traits of an Entrepreneur

You can find what Bale has going for him in the links below: